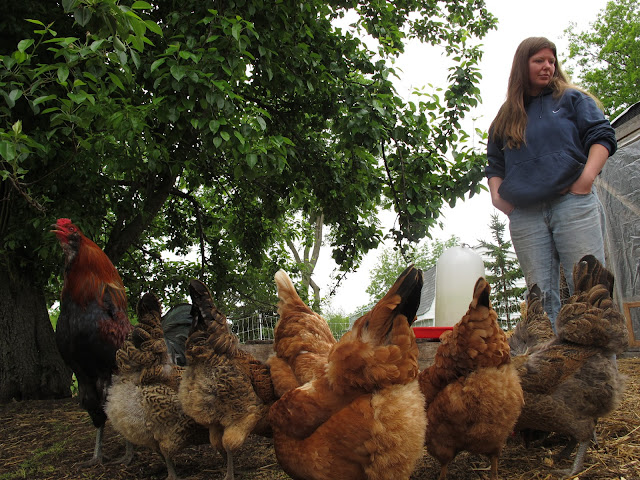 After 2 months in the paddock around the pear tree, we moved the chickens to a new location.  I don't say a new paddock, because I'm not too thrilled with the new location so far.  I have a wood pile and some compost in the way, so it is not quite the right shape yet.  Also, I plan to do some earthwork in this area behind the barn at some unknown point in the future, so we are not going to be adding trees or other permanent plantings until we are satisfied with the layout.  Still, we had to move the chickens so it will do for now. 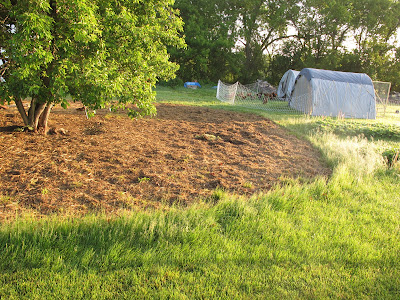 As you can see the old paddock is pretty much devoid of grass and is instead covered with several inches of mulch.  This is a combination of straw, leaves, grass clippings, wood chips, and 1/2 finished compost that we put down one wheel barrow load at a time.  The chickens did a great job of turning it.  There is no visible manure anymore, and there was no smell at all.  We basically did the deep litter method over a large area.  After fluffing up the litter under the coop, and a bit of work with the rake smoothing things out, I tossed out 1/2 of my seed balls.  We also planted some comfrey and garlic around the drip line of the pear.  And have added a young Stella Cherry tree to the paddock.  I have also put a few random chunks of log around just because. 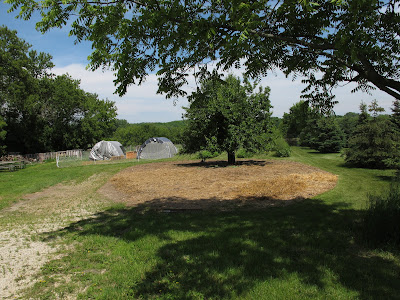 I have to admit, it feels a little crazy at this point.  I'm sure that the wealthy neighbor who flies his plane over all the time thinks we're crazy, or stupid, or both.  But it does feel good to skip a whole big area when I'm mowing.  The weather has turned dryer, so I think I'll need to do some watering to get the seeds started.  But then I think that maybe I should just back off and let nature decide when the seeds should germinate.  And then I think about the sizable investment of seeds in those balls and how I would really like to see some of them sprout.  I'll probably water. 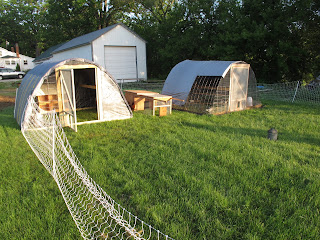 Since our flock has doubled, and the babies are growing fast we built a new, heavy duty, hoop coop.  This one does not have wheels or a hitch to move around.  We are experimenting with having a permanent coop and run that connects to the various paddocks.  By building this inexpensive structure, we can see how the location works before we think about building a permanent structure.  It also gives us some time to become better chicken keepers, so we know what we want and need in a coop. 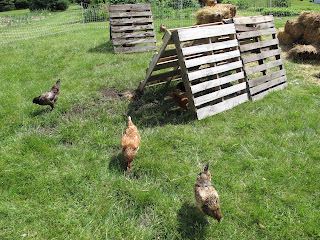 Some pallets wired together and the rest of the straw bales from the winter coop provide some much needed shade and help define the new, wide open, area.  Having some structure for the chickens to move around and jump on top of really helps keep things more peaceful.  The birds seem more comfortable.  They made their dust bath just outside the shelter of the pallets. 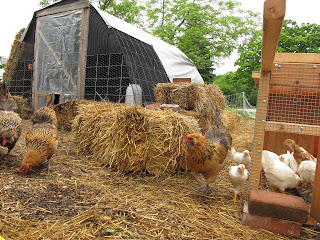 After a couple of weeks inside the paddock, but still locked in their brooder, we had finally let the babies out with the big chickens.  They integrated pretty easily.  Oh, they definately get put in their place now and then, especially when they are trying to join the big chickens at their feeder.  But overall the transition has gone well.  Now they are housed in the mobile hoop coop and the adult birds we switched over to the new one.  One of our ameraucana hens has taken up residence with the babies.  She was always roosting alone, usually somewhere lower than the rest of the flock, either on the nest boxes, or one of the small perches I put in the corner.  Now she seems perfectly happy with the babies.  Only a couple of them are roosting up on the big perch with her.  The rest still sleep on the ground, under the lamp we put in the hoop coop. 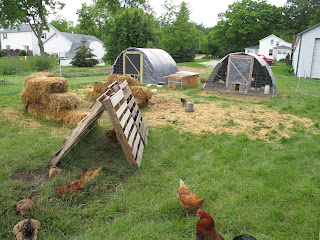 We still have not hooked up the charger and electrified the netting.  It's working out well, or at least we haven't had predator problems so far.  The rooster and one of the Rhode Island Reds jump out once a day.  I call them Bonnie and Clyde.  I can catch the hen, but the Rooster stays just out of reach.  I can open the fence and heard him in easy enough though.  Fortunately, I am able to come home for lunch and put them away before they do too much damage.  We suspect the hen is nesting in the day lilies up by our well, but so far we haven't found the nest.  I think we are going to let it go for a while and see if she goes broody.  If we can't find her nest, then hopefully the racoons and coyotes won't either.

The babies run right through the netting, but luckily they seem to be drawn to the compost area and are leaving the gardens alone so far.  They never wander far, foraging on the dandelions, plantains, and clover around the compost area.  Thankfully we have not had any more sick birds.

Posted by Josef Theisen at 7:52 PM

Josef Theisen
This blog is simply my garden notebook. A place to store thoughts and pictures in our rambling journey towards clean whole food. My wife, Nikki, and I steward 1 acre in beautiful Southeast Wisconsin, and have a passion for good food and healthy soil. We use no pesticides, herbicides, fungicides, or chemical fertilizers. More recently we have stopped tilling as well. My intention here is to document and share the things I learn along the way in this attempt at creating a small scale sustainable homestead.

I also enjoy photography. All of the pictures on this blog are original and most of them are from our backyard. If you would like to use any of the material on this blog, I ask that you first request permission by e-mail to wholeviewfarm@gmail.com and include a description of what you plan to do with it.